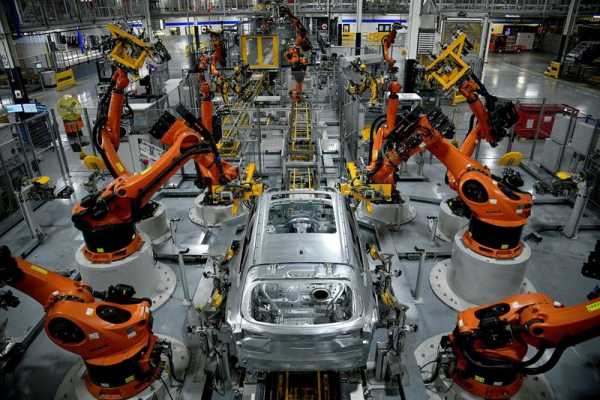 The American manufacturing industry is catching its breath; the supply bottleneck begins to break

The investigation does not fully capture the impact of the Omicron COVID-19 variant, which is spreading rapidly in the United States and abroad. Soaring infections could force workers to stay home and halt temporary progress in the supply chain.

“There is still a long way to go before supply chains fully normalize, but falling prices and increasing employment are positive signs,” said Will Compernolle, senior economist at FHN Financial in New York.

The ISM index of domestic factory activity fell to 58.7 last month, the lowest level since January 2021, from 61.1 in November. A reading above 50 indicates an expansion of the manufacturing sector, which accounts for 11.9% of the US economy.

Economists polled by Reuters had forecast the index to drop to 60.1.

Manufacturers of fabricated metal products have expressed optimism that “we have reached the top of the hill to begin to descend a gentle slope which allows us to return to something that looks like normal.” Their counterparts in the chemical industry said that “hunch says it is getting easier and easier to source chemical raw materials.”

Machine makers have reported that “steel costs seem to be going down a bit.” They also noted improvements in â€œsupplier performanceâ€ and â€œon-time deliveriesâ€. But transport equipment manufacturers said capacity remained “limited due to the global shortage of chips.”

The measure of supplier deliveries in the ISM survey fell to 64.9 from 72.2 in November. A reading above 50% indicates slower deliveries to factories.

ISM’s Fiore said transportation networks, a harbinger of future supplier delivery performance, are still operating erratically, but there are signs of improvement.

Raw materials have been scarce as global economies recover from the coronavirus pandemic. The shortages were also exacerbated by the shift in demand for goods from services at the start of the pandemic. Millions of workers needed to produce and transport raw materials remain on the sidelines. (Graphic: More jobs than job seekers, https://graphics.reuters.com/USA-FED/JOBS/egvbkmeoepq/chart.png)

US stocks were trading mixed, with the Dow Jones Industrial Average and S&P 500 index setting new highs earlier in the session. The dollar was flat against a basket of currencies. The US Treasury prices were mostly lower.

Emerging signs of improvement in supply chains suggest that ex-factory inflation may start to ease soon.

The survey’s measure of prices paid by manufacturers fell to 68.2 last month, the lowest level since November 2020, from 82.4 in November. The 14.2-point plunge was the biggest since October 2011.

This confirms the Federal Reserve’s long-held view that the current period of high inflation is transitory. Inflation is well above the US central bank’s flexible 2% target.

“The report is in line with our expectations that inflation will likely hit an inflection point in the first quarter of this year,” said Tim Quinlan, senior economist at Wells Fargo in Charlotte, North Carolina.

The ISM’s prospective new orders sub-index fell to 60.4 from 61.5 in November. With customer inventories remaining depressed, the slowdown in new order growth is expected to be temporary or limited.

Indeed, a separate Labor Department report released on Tuesday showed that a record 4.5 million Americans voluntarily quit their jobs in November, which will put pressure on companies to raise wages. in order to attract workers.

The ISM manufacturing employment measure hit an eight-month high of 54.2 from 53.3 in November. This, combined with the very low number of claims for unemployment benefits for the first time, supports the view that employment growth accelerated in December.

Non-farm payrolls probably increased by 400,000 jobs in December after increasing 210,000 in November, according to a preliminary Reuters survey of economists. The Labor Department is due to release the December employment report on Friday.