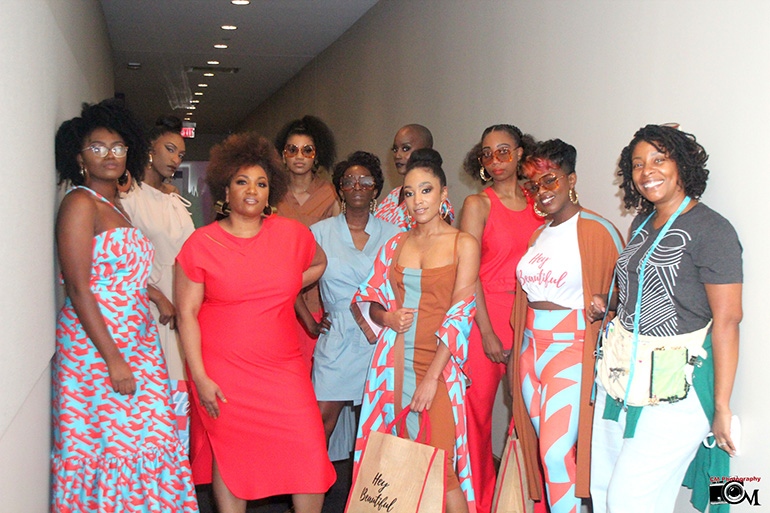 Service manholes at the Currency Museum

Running and texting through a parking lot is tough, especially when you’re wearing Doc Martens. But I’m just trying to get to the Mint Museum’s QC GarMINT District event, part of the Levine District’s Wednesday Night Live series.

The event is billed as a confident runway featuring designers Megan Ilene, Gordon Holliday, Tara Davis, Gege Gilzene and Brehon Williams, who will showcase their couture creations in a live fashion show.

The show underscores the Mint’s recognition of fashion designers’ work as art, while serving as a prelude to the December 2022 exhibition and catalog Fashion Reinvented, which celebrates 50 years of fashion collecting by the Currency.

In my moment of neglect, the phone rings. “Where the fuck are you? my friend Kaycee yelled at what sounded like a million people talking.

I have to do the most because my boyfriend and I catch the eye of another couple who can’t find their way to the currency museum and decided to follow. Hella late and frantically trying not to miss anything – no thanks to the road rage breeding ground that is Charlotte – I luckily survive the most hectic seven minutes I could ever spend in America.

Upon entering, my mood changes instantly. I notice people taking selfies and outfit photos and I’m starting to feel good. We were greeted by our friends: Kaycee, who is always tomboy chic; and Kevin, dressed in a Vivienne Westwood suit right down to the boots. I took a second to look around and get an idea of ​​the setup.

The all-white runway with the multicolored lights is perfect, simple but the draping set the mood of the runway and didn’t take away from each designer’s aesthetic. Thanks to QR code programs, I am quickly able to see which walk I just missed. I hear Ohavia Phillips (one of the best people to host anything) gave a brief intermission for the bar, or maybe I just made that up. Anyway, I definitely went to the bar.

Something about drinking alcohol in a museum strikes me as rebellious but cultured, you know? Besides the drinks and the vibes, an event like this brings out fashion enthusiasts, but it also brings out the most elite socialites in Charlotte’s arts and music scene. It almost feels like a family reunion. The energy is high and I know it will be a good time.

Since I don’t quite understand the directions nor do I recognize the drink tickets right next to the drinks, I do everything backwards (what a surprise) but it gives me time to catch up on the rest of the info on the creators.

The designer I missed was Tara Davis. I got to see the last walk with all of its designs and notice how eclectic its patterns and the vividness of the colors. It was giving the excellence of chic black – but to brunch. Like the character of Issa on Unsafe go to a one day party.

I see the layout a little better now that everyone is starting to spread out and socialize, but I have to figure out how I’m going to get a better view of the show. I look up to see people in the display cases, which honestly is the best seat in the house. My friends decide they want to go up the escalators to catch an aerial view, so we do it just in time for Megan Ilene.

Megan’s look intrigued me because I read that she only uses biodegradable and organic materials. Zero waste. The ability to manipulate certain textiles fascinates me, thanks to watching several seasons of Project track and my love for used and recycled clothing. There are two looks I gravitate towards: the paint-splattered tunic dress, because I like an “art hoe” look (that’s a compliment); and the asymmetrical dress. The latter is textured and layered over pink cigarette pants and a white blouse. It could easily be formal or casual with minimal effort.

I struggle to record while holding my wine and phone and navigating escalators while literally meeting everyone — giving big hugs and even more praise.

Ohavia makes sure to make a fashion statement every time I see her, as she smiles and claps while standing behind the catwalk. I’m too far away to see the details of the beautiful black dress Oh is wearing, but I notice Davita Galloway, one of Charlotte’s most notable curators — and to me one of the most stylish women in town.

I always have to see what Davita did because he’s always going to make a statement, and he is tonight! It looks like a blazer met with a belted and layered brown graphic print dress and some sort of sheer tulle skirt part at the bottom, to top it all off with art mom specs…a look!

I consolidate my space from the second to the top floor and finish my wine just in time for Gordon’s looks. I’ve known Gordon Holliday for years through mutual friends and random events, and when I worked at the Buffalo Exchange, he came to sell clothes and always wore something amazing that he had made.

He’s grown so much in the small litter I got through Instagram, so I’m excited to see his pieces. The models walk in a very stable and intricate way, telling a story through their strides. When Gordon speaks with Ohavia at the end of the event, he mentions that his line was inspired by the first African samurai warrior (Yusuke), but with modernized elements of everyday streetwear and high fashion. He kills him!

My favorite Gordon piece is a pink patchwork shorts set; the pink floral jacket looks like terrycloth and there’s a matching bag! There’s so much detail in these looks that I know I have to find a way to get closer because the overhead view doesn’t do these designers the justice they deserve.

The energy shifts to the other end of the floor, where a ballroom couple take the stage to perform a three-song dance set, including Michael Jackson’s “Butterflies.” The way everyone is singing in unison, laughing and pretending their phones are microphones, the energy is still palpable. I am among familiar strangers.

I’ll admit it: I love the attention my outfit gets as I walk down the escalator. I felt weird wearing bright orange at the start of March, but I don’t like to follow those “seasonal color palettes” rules. Not my ministry.

I enter into a long conversation on the subject, almost forgetting about the next traveling designer. I can meet more homies downstairs near the top of the runway where I see one of Brehon Williams’ looks: a white to pink ombré suit with blue accents. Shortly after this look, an all black outfit with pants under a pleated skirt hits the runway and I love it!

Androgynous looks are always a go-to and must-have for me. I read on the program that Brehon recently transitioned from strictly womenswear to experimenting with menswear, and I can’t wait to see how his creativity moves forward. Ohavia reappears after another outfit change, seemingly out of nowhere, in a white blouse-blazer with the prettiest cascading ruffle sleeves I’ve ever seen.

The final designer starts his walking looks with a very dramatic score, which catches the attention of many people around me. GeGe Gilzone delivered nothing short of dramatic, giving chic edgy looks. There was a short, green, ruched “freakum” dress with exaggerated puff sleeves that I’m drooling over. I look at my boyfriend to get his attention (my look says “Buy me that!”). He laughs and points to the runway, nodding at the model’s slow, choreographed rotation.

GeGe puts on a show for the crowd and we eat it. Just when I think the green dress is my favorite, there’s a black tulle blouse that seems to explode off the chest, paired with high-waisted pants that have a black and white geometric pattern. I can’t take my eyes off it – until the aggressively (but not rudely) black-clad event staff clears the area where people (me and the homies included) are all standing.

I’m confused for a second, then I look up and see LA Charlotte legend Jennifer Michelle and walk down the escalator to the runway in GeGe’s final look. It’s a black and white robe trimmed in black lace with a high slit and a train as elegant as any, paired with what looks like a reversible green kimono/shawl instant. The presentation, the surprise, the subtleties… that’s how you end a fashion show!

Dammit Wesley, facilitating vibes beyond visual art as the evening’s DJ, sets the tone throughout the show until the end as he encourages us to introduce ourselves when Ohavia offers us a ride. on track for a live version of Prince’s “I Wanna Be”. Your lover.” As everyone cheers her on and starts to say goodbye to her while taking pictures with her friends and family, I can’t help but be in awe of fashion’s presence in the It’s always been there but, thanks to Davita, Jennifer and the Mint, I hope it grows bigger in the near future and gets ALL the looks it deserves.

As I walk out, I let the breeze carry my high mood away until my boyfriend looks at me and says, “Do you remember where we parked?”


Become a nervous member: Get better connected and become a Queen City Nerve member to support local journalism for as little as $5 a month. Our community journalism helps keep you informed through a range of diverse voices.

Hot Dog on a Stick is a cultural phenomenon