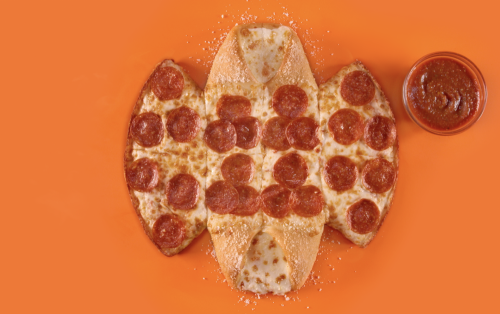 Little Caesars, home of the HOT-N-READY and Crazy Calzony™, is teaming up with all-new The Batman movie for a global promotion to bring Batman-inspired bat-shaped pizza to all Batman fans . The Batman is set to open in Singapore cinemas from March 3.

Little Caesars, home of HOT-N-READY® and Crazy Calzony™, is teaming up with all-new The Batman movie for a global promotion to bring Batman-inspired bat-shaped pizza to fans of the band legendary comic character and worldwide pizza chain. The Batman is set to open in Singapore cinemas from March 3.

The Batman Calzony is created by combining the dynamic duo of a pizza lover: a pizza and a calzone. This bat-shaped product features a pepperoni pizza with a parmesan and buttery calzone-like crust filled with crazy garlic spread, cheese and julienned pepperoni, with a side of Crazy Sauce®.

The Crazy Calzony was originally introduced by Little Caesars in the US in August 2021 as a limited time offer, adding an instant classic to the chain’s already storied menu.

“Now everyone can bring superhero vibes to pizza party by trying the new The Batman Calzony,” said Jeff Klein, Marketing Director at Little Caesars, “It’s the most delicious part of our partnership. with the upcoming The Batman movie.”

Launching February 1, 2022, The Batman Calzony features a large pepperoni pizza divided into eight slices, each generously topped with parmesan cheese while mouth-watering slices of pepperoni sit on a bed of decadent muenster and mozzarella cheese.

The culinary masterpiece is encrusted with a buttery calzone-like crust, which is filled with addictive Crazy Garlic Spread alongside signature Cheese plus Crazy Sauce®. Taste only the freshest as the dough is made fresh from every store daily, while the pizza’s robust tomato sauce is made from vine-ripened California crushed tomatoes. The Batman Calzony comes with a serving of Crazy Sauce® for dipping.

Customers can order The Batman Calzony for delivery through www.littlecaesarsdelivery.sg or prepay through the website for self-collection as well as place their orders at Little Caesars® Pizza outlets located throughout the island.

May the Bat-ter video win

So how the hell do you eat this uniquely shaped pizza? Yes, this is the latest campaign from Little Caesars® Pizza, where customers can show their friends and fellow pizza lovers how they would conquer the interesting culinary creation i.e. The Batman Calzony.

Want to get a slice (pun intended) of the action? Follow the simple steps below:

2. Record a short clip, showing us what we know (promise it’s the last!) about conquering The Batman Calzony.

“We know the people here are foodies at heart and, like true foodies, they always have a way to conquer the impossible. Because The Batman Calzony is so unique and deliciously huge, it will certainly be interesting to see how consumers take it over. We are excited to see what will also appear on our FYP,” says Evelyn Tan, Sales, Marketing and Communications Manager at Little Caesars Pizza Singapore.

For customers looking for a bargain, from February 1 to March 2, 2022, check in at the Little Caesars® Pizza Singapore location with a FB or IG post and get The Batman Calzony FREE when you spend $22 in only one receipt on the a la carte menu.

Based in Detroit, Michigan, Little Caesars was founded by Mike and Marian Ilitch in 1959 as a unique family restaurant. Today, Little Caesars is the third largest pizza chain in the world, with stores in each of the 50 U.S. states and 27 countries and territories.

Known for its HOT-N-READY® pizza and famous Crazy Bread®, Little Caesars has been named “America’s Best Value” for the past 14 years (based on a nationwide survey of domestic customers of Quick Service Restaurants conducted by Sandelman & Associates – 2007 -2020 titled “Top Rated Chain – Value for Money”). Little Caesars products are made with quality ingredients, like fresh, never-frozen cheese, mozzarella and Muenster, and sauce made with freshly packaged, vine-ripened California crushed tomatoes.

A fast-growing company with over 60 years of experience in the $145 billion global pizza industry, Little Caesars is continually seeking franchise candidates to join our team in markets around the world. In addition to providing the opportunity for entrepreneurial independence in a franchise system, Little Caesars offers strong brand awareness with one of the country’s most recognized and engaging characters, Little Caesar.

Little Caesars® Pizza is franchised by Palm Tree Foods Pte Ltd and has been launched in Singapore since 2018, with the opening of the first ever flagship store at Funan Mall. Since then it has expanded to 5 outlets at Holland Piazza, Junction 9 and its latest addition at West Coast Plaza, as well as the opening of Northshore in the first quarter of this year. True to the idea of ​​offering the best artisan pizzas at an ultra-budget price, it has been a hit in Singapore as Singaporeans resonate with the promise of great value at a low price.