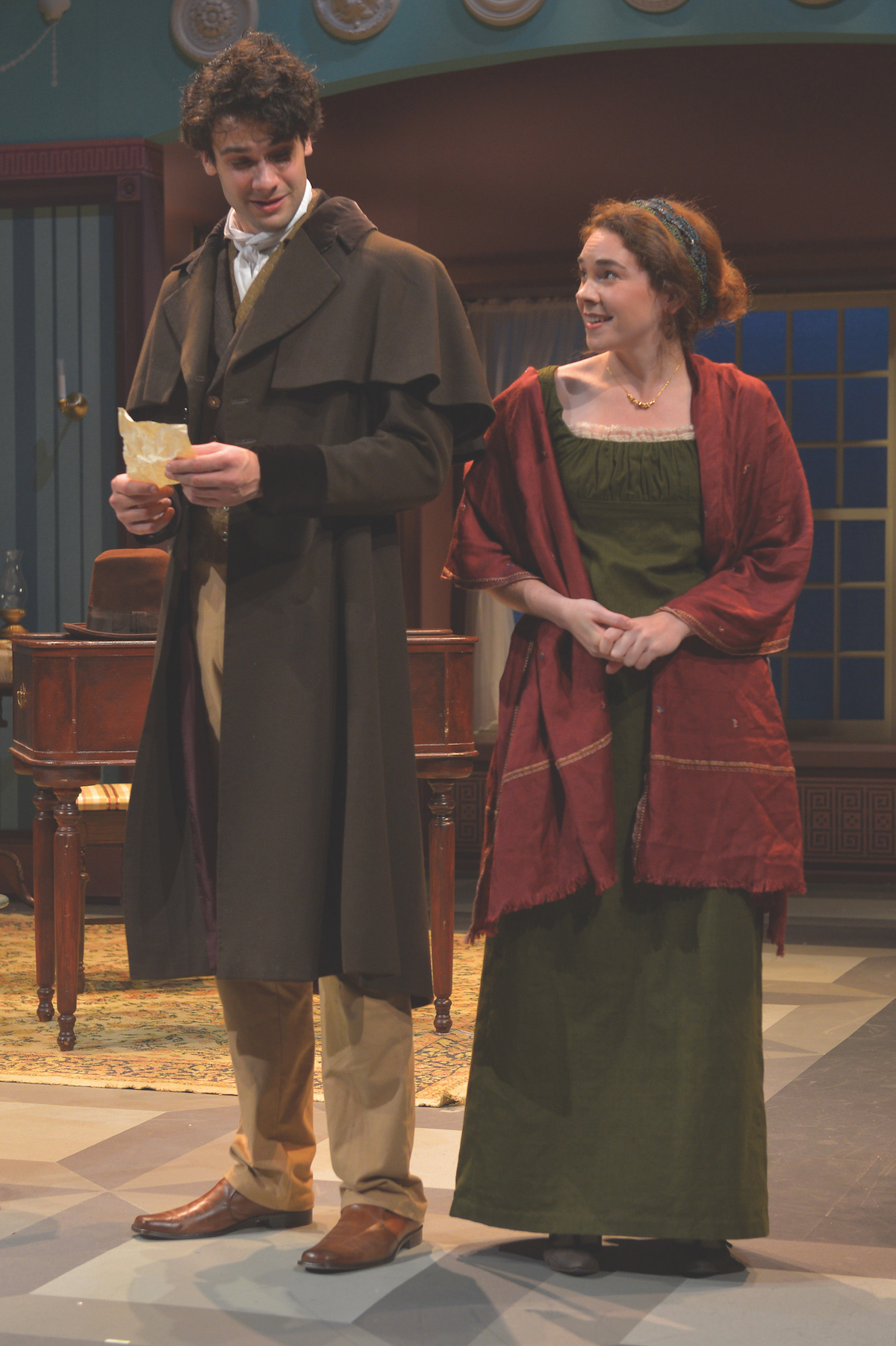 Just in Time for Christmas: Georgiana Darcy and Kitty Bennet Direct the Final Part of “The Pemberley Trilogy”

During the weekend I had the pleasure of sitting–via Google Meet — with National Playwright MTC Mellon in Residence Lauren M. Gunderson and Former New Play Development Director Margot Melcon, to discuss the debut of Georgiana and Kitty: Christmas in Pemberley, which opens this Thursday, November 18 at the Compagnie du Théâtre Marin. This is the last part of their three-part play, The Pemberley Trilogy, who follows the Bennet sisters after Pride and Prejudice. New to the entire company and a big fan of Austen, I really enjoyed the conversation.

Jane Vick: So this is the third and final installment – what’s the story of the other two?

Margot Melcon: The first, Miss Bennet, after Mary Bennet, created at Marin Theater Company in 2016, and the second opus, The Wickham, after Mr. Wickham and several new characters, premiered in 2018.

JV: So there is a line of sight between the three pieces?

Lauren Gunderson: So each one actually takes place in the same Christmas – the same year, the same place, a different perspective. The first part takes place upstairs, the second on the ground floor in the utility rooms, where we meet the people who support the house and know the family very well. That last installment actually makes it a bit of a loop – part one takes place in the same house, but act two sends you 20 years into the future.

MM: And the three parts of the trilogy take place two years after the end of Pride and Prejudice. We resume two years later and check with everyone.

JV: It’s so cool, were there any rights you had to acquire?

MM: Jane Austen is in the public domain, and the plethora of fan fiction is vast. This is our contribution.

JV: Have you engaged with other writers or playwrights in particular in this process? I know there are tons of other Austen writers.

LG: A lot of them were adaptations of Austen’s work but not continuations, so that’s our little niche, at least in the theater. In the world of novels and films, there are many sequels. But we engaged with the Austen Society a few times, which was a lot of fun.

JV: How long have you worked together?

LG: Almost a decade? For most of our relationship, it was the playwright and literary director on Margot’s side and the playwright on my side, so at the start of this project we became playwrights together. Our talents and instincts complement each other in such a way that we can somehow tap into each other’s momentum.

JV: It’s adorable. Looking at Austen more closely, something that I have always appreciated about her work – much of what makes her a central part of women’s literature and literature in general – is dimension and agency. that she gives to her female characters, without giving up the love story or degrading the beauty that marriage can offer. How do you relate to this tone in these pieces?

MM: I think it’s a combination of loving what Jane Austen did for women in her day, and also approaching it with a contemporary sensibility. We recognize that all of these women, and all women, period, are complicated and multidimensional. So it’s a great opportunity to take what Austen started and run with it.

LG: It’s a very high bar, trying to put words in the mouths of these iconic and beloved characters – we don’t take that lightly, and what we sure don’t do is try to do it exactly as she would have done. it is done. We made these characters feel slightly more contemporary than they would have been in the novels, and it’s a conversation between the two eras, allowing us to see what has changed and what hasn’t. exchange. And all the sisters are so different, and in this last installment we also integrate Georgiana Darcy, which adds another layer of what feminine and femininity is all about. We are able to truly unwrap and unravel the threads of standards for women through the ages and how they resonate now.

JV: So Georgiana and Kitty are the stars of this latest installment – love it, I remember wanting to see more of Georgiana, especially after watching Kiera Knightly’s adaptation of Pride and Prejudice, which I really loved—

LG: Me too! We are divided; Margot did not.

JV: Margot, didn’t you like it ?! I remember this movie coming out vividly – I was 12, it was a rainy day, I was in a black and white sweater, and I fell so much in love with Mr. Darcy –

JV: Oh my God! I was not well for a while. What a service. Georgiana and Kitty are interesting characters in this adaptation, especially Georgiana, who has a terrible relationship with Wickham when she was so young. We don’t really see the rest of his story. Without giving too much away, how did you approach her as a character?

MM: What is wonderful about working with existing characters who are not the main characteristics of Pride and Prejudice is that they are actually much easier to write. We don’t know much about Georgiana or Kitty, and what we do know gives us a great jumping off point to imagine her, based on that relationship with Wickham, being raised by her brother, etc. We were able to draw a character that we found interesting and complex without being a departure from the novel.

LG: And in this episode, we’re focusing on female friendship, which is good. There is certainly a love story, but the heart of the play is really this friendship between two women.

JV: I love it, it’s beautiful to focus on non-romantic romantic relationships and give them the credit they deserve.

LG: Yeah, it’s kind of the Jane-and-Lizzie relationship. Georgiana and Kitty are different from each other, they complement and support each other throughout.

LG: From that… until now…

MM: One trilogy is good, three is solid.

LG: We are sort of Pride and Prejudice‘d out.

JV: Of course. And are you both considering a future collaboration?

MM: We talk about it all the time, and we also say to ourselves, “We have to get over this one”.

LG: It takes a lot of time and dedication to tell a story well. We’re going to move on to the next thing.

JV: And in this process, is there something in particular that has marked each of you?

LG: What makes Austen so captivating is that even though you’ve read Pride and Prejudice three times, and I know Lizzie and Darcy are going to get together, for quite a while, it feels like there’s no way forward. Really making sure each of our pieces had a moment where it felt absolute, irreparable, and then moving on to a breakthrough, was essential. Because the way you do, the growth and resilience that you develop, is really the job of being a human.

JV: I was going to say – it’s deeply applicable to life itself.

LG: Okay, everyone has that. And we didn’t just want these characters to be beautiful and adorable all the time, they have to work, learn, grow. So that was my moment.

MM: I think when we first started one of the things we really wanted to do was write plays for the holidays because there just aren’t enough good stories to tell during the holidays. . And when we had that idea, it really became essential to build around the family. Because, beyond the denominations, the holidays are times when we get together with family. And in Austen’s work, family is so central to the unfolding of the stories. It’s a challenge, to be in a family unit, you have to make room for each other. And the definition of family is broad. They could be blood relatives or a select group of people you carry with you throughout your life. So being part of a family and still being able to present yourself as your authentic self is the process. How do you stay true to yourself within this larger group? So the Christmas aspect of these pieces is there, but the most important part is the family reunion. And everyone being in this messy time where you all get busy with each other and navigate together when things go wrong.

JV: Your focal points really complement each other – getting together as a family and working to establish your individuality will get you to that stuck point that initiates so much change. And these lessons, especially after 2020, are so relevant. It’s great to see them from Jane Austen’s perspective, through you two!

LG: I also want to express a huge gratitude to our director, Meredith McDonough, and our composer, Jenny Giering, who wrote all of Georgiana’s piano pieces.

MM: The collaborators and the cast members too, they brought these brand new characters to life in an incredible way.