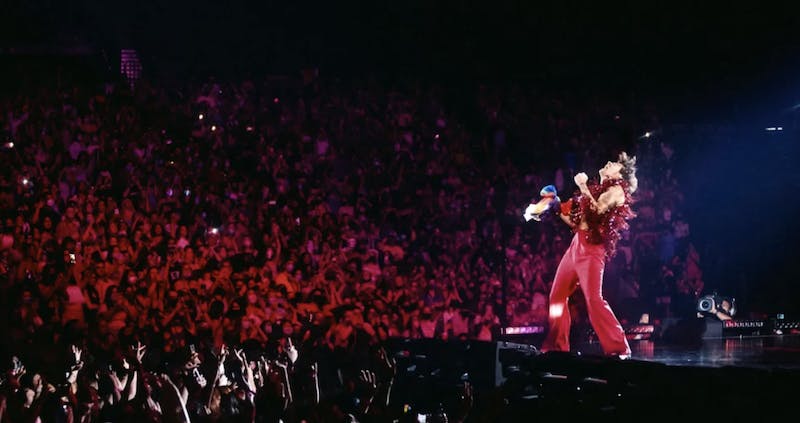 After more than a year without concerts due to the pandemic, Harry Styles is back and better than ever with Love On Tour.

Love on Tour was originally slated for 2020 following the release of Styles’ second album, Fine Line. However, Styles was only able to put on a few shows before COVID-19 took over the world.

Many Harry Styles fans have had time to delve into the fandom throughout the pandemic, especially on TikTok.

Thousands of fans have knitted replicas of a JW Anderson cardigan Styles wore when he performed on Today’s show. The cardigan’s success on TikTok led the company to release the color block pattern to make it easier for fans to recreate the sweater at home.

As tour dates have been canceled and postponed, fans have wondered if they could ever see Styles perform live in person.

With all the time spent waiting to see if the tour was going to happen, fans turned to their creative side again, as they did with the JW Anderson cardigan.

Love On Tour outfits were becoming more and more prominent on social media platforms such as TikTok, leading many fans to feel compelled to create something fabulous.

Fans began to come up with daring outfits inspired by Styles ‘songs, jokes inside the fandom, and Styles’ own fashion sense.

Harry Styles fan and fashion enthusiast Tatum Oliver found out at the last minute that she had secured tickets to Love On Tour in Washington DC. This left little time to create the perfect concert look.

“It was literally an equal priority to my class work,” Oliver said.

Other music events such as Coachella have become known for their extravagant looks worn by concert regulars as well as celebrities.

Coachella fashion has developed its own sense of style with a mix of bohemian, western, neon and fringe colors galore, similar to what Love on Tour is developing, with just distinctive looks.

Whether or not Harry Styles fans just unlocked the future of concert fashion, it’s clear these looks are here to stay for the rest of the tour.

Eurostar puts tickets on sale just in time for Christmas