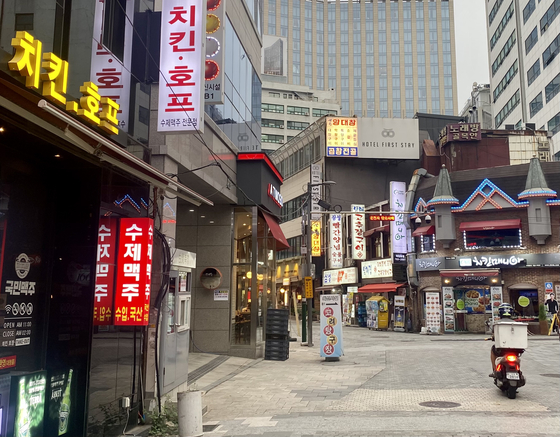 Franchises are growing but their income is falling

Business slows down in an alley of chicken restaurants in Seoul. [KIM HONG-JOON]

The number of convenience store, chicken and coffee shop franchises increased last year as the pandemic convinced entrepreneurs to play it safe and not to open independent stores.

Statistics Korea said Monday that franchise stores in Korea totaled 235,709 in 2020, up 9.5% from a year ago.
Convenience stores were the fastest growing, adding 4,977 new stores last year alone, a 12% year-over-year increase.

Franchised cafes surpassed the 20,000 mark to 21,360, up 16.4% from the previous year.
Since Korea has 23.1 million households, there is a convenience store for 498 households and a Korean food restaurant for 641 households.

But the pie did not increase near the number of slices. Annual sales of Korean restaurants averaged 248 million won per store, down 18.7 percent or 58 million won from a year earlier. Chicken franchises suffered a 3.5 percent drop in sales to 199 million won.

For all franchises, annual revenues have decreased by 9%.

Ad franchises were the hardest hit, as social distancing measures prohibited people from gathering in groups at night.