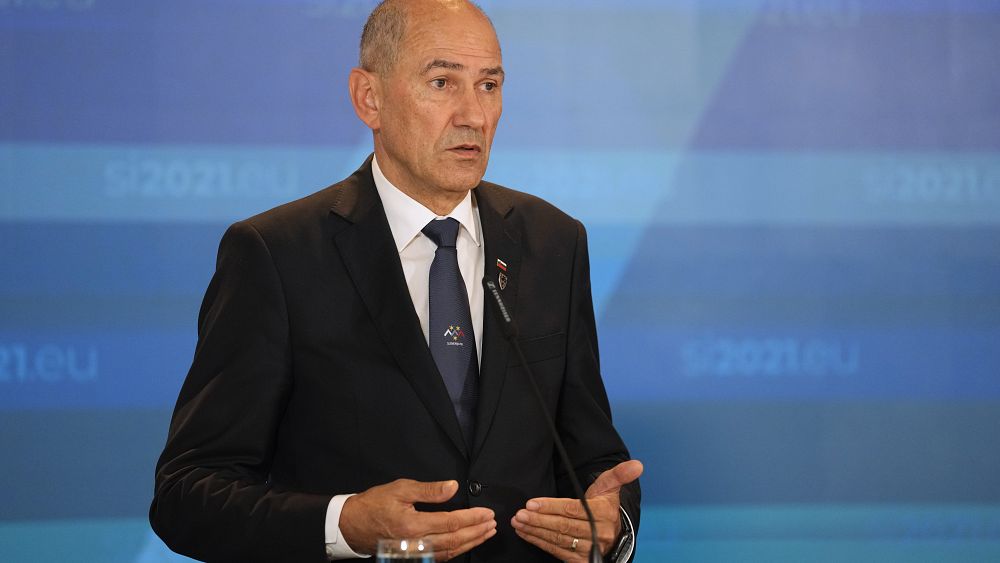 The European Commission is “on the verge of breaking the rule of law” with its efforts to ensure that member states respect the bloc’s core values, said Janez Janša, Slovenian Prime Minister.

In a lengthy interview with Euronews, Janša denounced President von der Leyen’s executive for engaging in “political battles” between member states and not being an “honest broker”. He also said the rule of law has become a “politically abused term” exploited for partisan purposes.

Janša’s comments come as the European Commission prepares to activate a new mechanism that links EU funds and respect for the rule of law. The Commission, after finding an alleged violation of EU law, may recommend the suspension of EU payments. The decision must be ratified by national governments by qualified majority. Janša does not agree with the way the diet works.

“I think it is close to breaking the rule of law because the Commission has to be an honest intermediary.”

According to the EU Treaties, the Commission must ensure the application of the Treaties and EU law. The executive has the right to open infringement proceedings against a member state that does not apply EU law. If the Member State does not correct the wrongdoing, the Commission can take legal action to the Court of Justice of the EU in Luxembourg.

Janša also condemned Věra Jourová, the EU commissioner responsible for overseeing values ​​and transparency across the bloc. Jourová, alongside Commissioner Didier Reynders, has become the most public face of the Commission’s efforts to ensure respect for the rule of law.

“Věra Jourová is, in my opinion, issuing statements which are a flagrant violation of the treaty. But she is supported by the European press. So she continues with this. If this had happened 15 years ago, I think she wouldn’t stay as a member of the Commission for a week. At that time the rules were clear, “Janša said, without specifying what kind of statements he was referring to.

Viktor Orbán, Hungarian prime minister and close ally of Janša, had previously called for Jourová’s resignation after the commissioner said Hungary was moving away from Western democracy. Orbán said the comments amounted to a “direct political attack”, but a Commission spokesperson defended him by saying Jourová had the “full confidence” of President von der Leyen.

“Africa is our backyard, not the backyard of the United States”

Janez Janša spoke to Euronews following a special summit devoted to the EU’s relations with its regions in the Western Balkans. Slovenia hosted the meeting in Brdo pri Kranju as the current holder of the six-month rotating EU presidency. Janša had previously signaled engagement with the Balkans and EU enlargement would be high on the political agenda of the Slovenian Presidency.

The summit did not produce any major political breakthroughs due to deep-rooted divisions among member states and simply reaffirmed the EU’s commitment to the enlargement process, without any deadline or timetable. Leaders agreed to put in place a new economic package to provide € 9 billion in grants to the region, with the potential to mobilize up to € 20 billion in public and private investment.

“[It’s not] only on investments in infrastructure, economic cooperation, etc. OK, we do. The European Union is the biggest investor in the region. It is very important that they appreciate it. But in these areas we have competitors. There is also China, Russia, Turkey, they also come with the investment and they do not condition that, ”said Janša.

“We are conditioning this with European standards, rule of law reforms, which is good, if there is a light at the end of the tunnel. But if the prospect of EU membership is not granted, so I think we’re going to start losing this competitive battle.

“There is a big advantage on our side: membership in the EU. I don’t think anyone or hardly anyone from the Western Balkans wants to be part of China, Russia or Turkey. They want to be part of the European Union. But if that prospect isn’t real, then we’re losing momentum and we’re at a crucial point. “

The special summit was preceded by an informal dinner where EU leaders discussed the bloc’s strategic autonomy and ambitions to become more independent, including in the area of ​​defense. Some member states fear that these calls alienate NATO and the United States, which they see as an indispensable partner. Janša believes that the two efforts are compatible.

“China is a superpower. They [went] to Mars without us realizing it, really. They are very far in artificial intelligence, in cyber capabilities. Now we are fighting the semiconductor shortage, and they still don’t know what the real problem is behind it, but we know what the consequences are. So, in short, we need NATO during this discussion, “he said.

“Last night the member countries that are not members of NATO admitted that they need NATO. But NATO and the United States will not solve the problems and conflicts in our backyard, in our neighborhood, in the Western Balkans, in the Mediterranean. is our duty. “

Janša believes that the weakness of the EU lies in its lack of coordination between national armies. The bloc should focus more on securing its own external borders instead of “sending money and humanitarian aid, which then ends up in the hands of terrorists or warlords,” he said. he adds.

“Africa is our backyard. It is not the United States’ backyard.”

“No place in Europe for 10 million Afghans”

Two recent developments have given new impetus to calls for greater European autonomy: the rapid takeover of Afghanistan by the Taliban and the surprising AUKUS pact, a new military alliance between the United States, the United Kingdom and Australia intended to counter the influence of China in the Indo-Pacific. The pact infuriated France after Canberra canceled a € 50 billion submarine contract.

“Yesterday morning I received a call from Australian Prime Minister Scott Morrison. He asked me to convey to our colleagues that for them the European Union is still a strategic partner,” said Janša.

“The European Union is needed in the Pacific, not just France,” he added. “[The EU] is a world power. We have influence in the world and the world has influence on us, and we have to take that responsibility. “

The other geopolitical crisis, the collapse of the West-backed Afghan government, has heightened fears about a future wave of refugees fleeing the Taliban regime and coming to Europe in search of protection and asylum. Civil society organizations say these fears are overblown and there is no evidence of an impending refugee wave.

As a sort of preventive measure, Member States, under the auspices of the Slovenian Presidency, decided to avoid a repeat of the 2015 migration crisis and to step up their support for neighboring countries, like Pakistan, to prevent massive flows. of migrants reaching EU borders. .

“Our obligation is to help those who have helped us,” said Janša, referring to the Afghans who worked for European diplomatic missions and who were evacuated from the country alongside EU citizens. “But there is no room in Europe for 10 million from Afghanistan.”

“The European Union will not repeat the mistake that some member countries made in 2015 after the war in Syria. Because it has not only hurt the fiber of the European Union, but the same people who are really refugees and we are not in a position to help them. because we took a million migrants who were not refugees and they took the place of those who really needed [asylum]. “

Charlebois: the “rescue” of food becomes common, in time for Thanksgiving