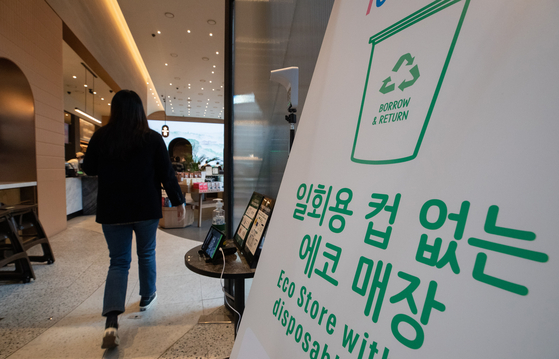 The Ministry of Environment announced on Jan. 24 that customers will be charged 300 won (25 cents) per single-use plastic or paper take-out cup starting in June. Customers can get the money back by returning the cup. [NEWS1]

A take-out coffee will cost you 300 won (25 cents) more from June, when a new government tax on single-use cups takes effect, and cafe owners aren’t happy about it.

“I will have to use the cash register every time someone hands me a disposable cup and returns 300 won, even if it’s not from my store,” said a franchise bakery owner in Suwon, Gyeonggi. “Some customers are still upset about paying for a plastic bag. I’m afraid they’ll throw a tantrum if I charge them extra for a cup.

The Ministry of Environment announced on Jan. 24 that the 300 won fee for a single-use cup, whether plastic or paper, will be mandatory in major food and coffee franchises from June 10.

Customers can get that money back if they return the mug to any store that falls under the new regulations.

All large franchises with more than 100 branches that sell coffee, ice cream, baked goods, fast food or any other drink are subject to the rule, according to the ministry.

But franchise store owners complain the department hasn’t thought through the plan – particularly because it applies to stores that rarely serve coffee but will still be forced to collect cups.

For example, a franchise store that sells hodugwaja, a small pastry shop with nuts, is on the list of companies subject to the rule even though it markets few drinks. Fast food chains Lotteria and Burger King are also included since both have over 100 branches.

Myungrang Hotdog, a national hot dog chain, is classified as a bakery franchise and has 651 branches in total. Businesses that do not sell coffee will not be subject to the rules, the ministry explained, but Myungrang Hotdog will be forced to follow the rules because some of its stores offer coffee.

“There is some confusion as to which franchise is subject to the rule,” an Environment Department spokesman said, “so the department will soon issue a notice on the matter.”

According to the FTC, the low-cost coffee brand Mega Coffee is the third largest among coffee franchises in terms of number of branches and Paikdabang the sixth.

Known for their cost-competitiveness, both companies mainly offer take-out from small stores located in business districts.

The owners of these low-cost coffee franchises are particularly unhappy with the new rule.

Drinks are served in disposable cups at a franchise cafe in Seoul. [NEWS1]

“It gets really hectic during rush hour when office workers come for coffee,” said the owner of a cafe in southern Seoul. “Should I hand out 300 won on a coffee that only costs 1,500 to 2,000 won each?” We should limit the time cups can be returned, I think.

Other store owners worry about the accumulation of waste.

“I pay to have my trash removed,” one person wrote on a website for small business owners on Jan. 24. “Do I get paid to recycle other people’s waste?”

But the Environment Department argues the backlash is based on a misunderstanding of the rules. Despite concerns from store owners, they will not be required to pay the 300 won refund if a customer returns a cup to their store.

Instead, the cup will be tracked with a barcode that can be scanned when the cup is returned, and the store where he bought it will pay the 300 won.

“As we are aware that franchise owners have negative views on the rule, we will hold a meeting next month to explain the issue,” the Department of the Environment said.

Exports of marine products recorded a growth of 35% to reach USD 6.1 billion from April to December 2021 (provisional) compared to USD 4.5 billion during the same period of 2020