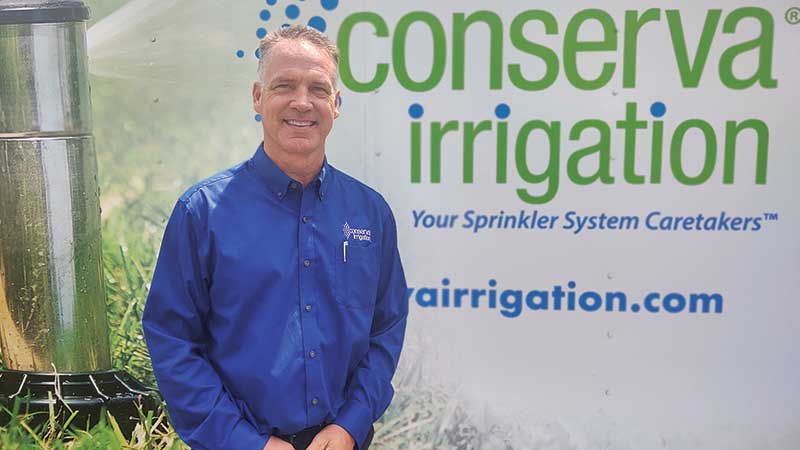 1. What do you want to tell me about Conserva Irrigation?

The guiding principle is twofold: I founded the company to save the earth’s fresh water and wanted to create a business model where we could create more financially independent business owners than has ever been created. in green industry. I wanted our owners to feel good about the way they make their money. It’s hard to argue; saving the Earth’s fresh water is a big call to action.

2. What were you doing before founding Conserva Irrigation?

My business partner and I have been best friends since the fifth grade. We have embarked on the construction of underground utilities. It was called UGLI – Underground Logistics Inc. “No job too bad. We loved this company. It was dangerous, and we struggled to build a ladder. All of our crews that were using the smallest equipment kept getting chased, “Hey, are you doing irrigation? They kept harassing us over this. They would say, “Dude, we asked nine companies, and they won’t come. They ghost us! Finally, I asked a client if they have an irrigation system, in case we disrupt it. He said no. I don’t know what prompted me, but I said, “Do you want one? He said yes. I said we would take care of it. It was a Friday. So we installed a system at my house on Saturday, at my (partner) Tom’s on Sunday, then we went to install one at the customer’s on Monday. This is how we entered the irrigation industry. It was a few years later that we revisited the concept of building an evolutionary irrigation model – that’s when Conserva was born.

I was the first Mosquito Squad franchisee 17 years ago. I enjoyed the franchise experience so much, and wanted to go back to irrigation. In 2009, 2010, there was no irrigation franchise. It blew me away. Due to this void, I began my journey after going to the Irrigation Association’s November 2010 National Show in Phoenix. My eyes were wide open. We were talking about smart irrigation, high efficiency nozzles, smart controllers. We hit the ground running. In the first 90 days, we had 305 clients. I knew I was on to something. In 2013, we started to expand across the country. As of June 2017, since we started franchising the model, we are now celebrating our 50th franchise owner, 121 licensed territories across the United States in 26 states. We believe that by December 31 of this year, we will be the largest landscape irrigation company in North America.

4. What is the product that made you successful?

Our flagship product is the way we have produced our service offering. We have developed a reproducible and scalable process by which we could evaluate the efficiency of an irrigation system. We call it the SES – System Efficiency Score. It is the most important element of our brand. Everyone is looking for this quick fix: “What is the absolute best rotor?” I think it’s the Toro T5, but that’s not what builds our business. The big moment was the advent of the SES. Having a consistent experience for the end user was super important. How we drive, how we present ourselves, how we dress, how we speak, the generated SES report… which has been the engine of our growth.

5. If you had my job for a day, what would you write about?

I would challenge the existing irrigation industry to go out of business as usual. Challenge the status quo. We see ourselves as adversaries, as disruptors. I do not accept the waste of water. There are a ton of very professional people out there, but I think we can all agree that the industry as a whole has labeled itself as plumbers. Take up the challenge: Irrigation 2.0 is here. Waste of water is no longer acceptable. One of two things has to happen: raise your standards and take on the challenge, or go look for another job. If you are not going to rise up, there is no place for you in the industry.

Best Advice: “Leading with passion. Lead with your heart. Hang everything over there on the ground. This is how we play ball. There is no hold back. We have a chance to get it right.

Impossible Foods adds to c-suite ahead of new rapid expansion